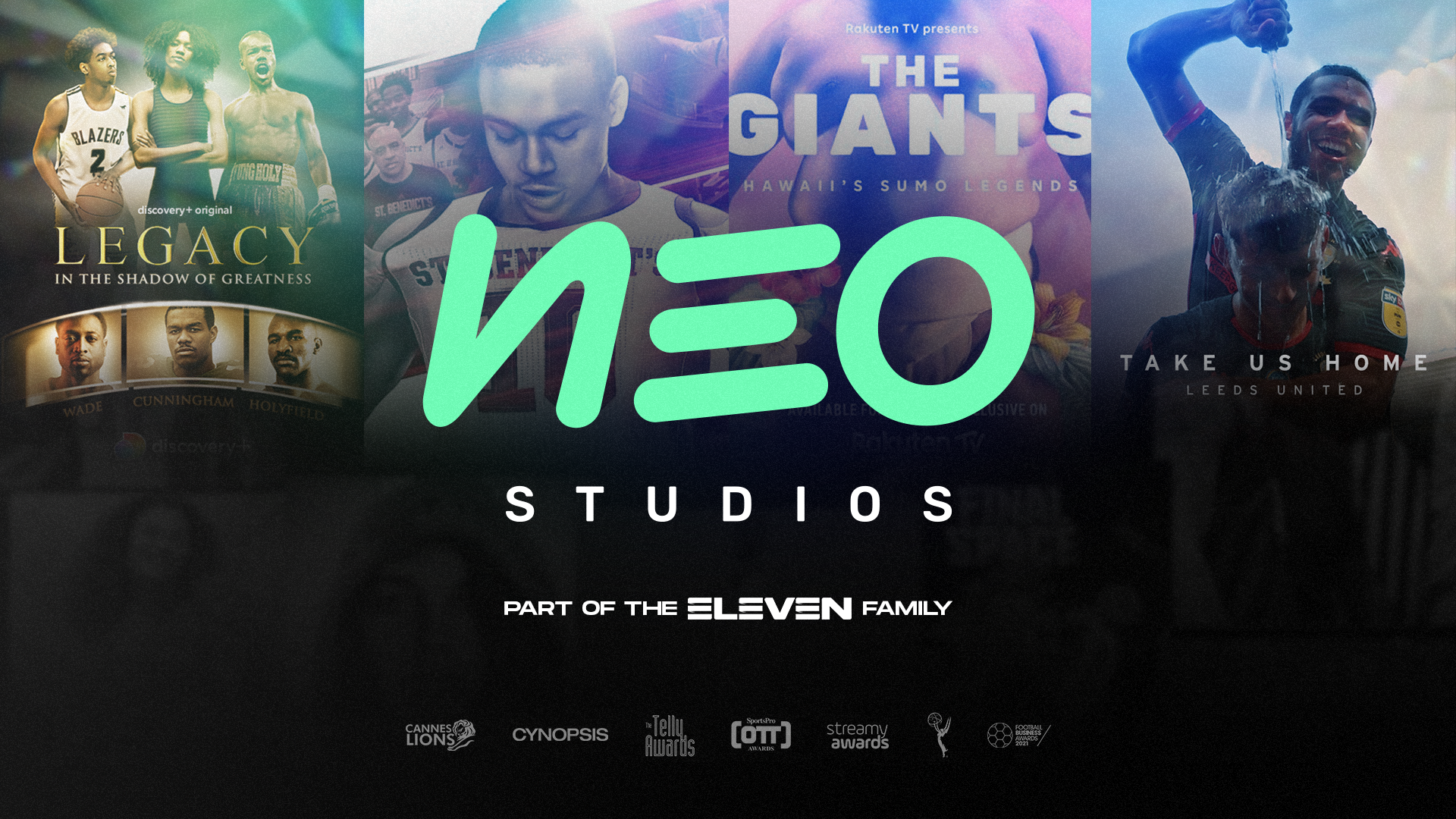 The sports production company NEO Studios has merged with US based Whistle Studios to create a global studio business, which will be housed within the ELEVEN Group.

The newly expanded NEO Studios will supplement ELEVEN's offering of live sport with best in class on-demand content for audiences across the Group’s network. NEO will also create premium sports and entertainment programming for third party streaming and linear platforms.

NEO was launched by ELEVEN's parent company - the sports and media investment platform Aser Ventures - in 2018. The studio’s first project was the award-winning Take us Home - Leeds United for Amazon Prime Video, which charted the club's return to the Premier League across the 2018-19 and 2019-20 seasons. Last year NEO told the story of four Hawaiian sumo wrestlers who travelled to Japan to become legends of the country's national sport in the critically acclaimed three-part show The Giants for Rakuten TV.

Whistle Studios has a long track record of developing and producing scripted, unscripted, animation, and live formats in the US. Recent releases include the Emmy winning docu-series Prideland for PBS and the NAACP nominated Benedict Men, a docu-series made in partnership with NBA star Stephen Curry and Unanimous Media.

The newly combined studio business will pool NEO’s capabilities in premium sports story telling with Whistle's diverse range of studio services, delivering additional value to the ELEVEN Group and third-party distributors. The merger also brings together the two studios' unique network of relationships with some of the biggest talent, sports teams and federations in the world. As part of the Aser Ventures group, NEO enjoys close links with Premier League club Leeds United and to a roster of stars affiliated to Aser’s media, marketing and talent agencies. Whistle Studios have a history of collaborating with some of the top names in US sport.

NEO will now focus on developing new formats across the entertainment spectrum, with a particular focus on sport.

NEO is currently working on the release of the six part docu-series Legacy: In The Shadow of Greatness, which will chart the journeys of three gifted young athletes and their legendary parents Dwyane Wade, Evander Holyfield and Randall Cunningham. NEO are working with 11-time Emmy Award winning filmmaker Jonathan Hock on the show, which will premier on March 8th on Discovery+.

NEO is also developing a new format called The Academy, which will follow young athletes hoping to fulfil their dreams of going pro. NEO has already partnered with the NFL Alumni Academy in the U.S, and will be expanding the series to a number of European football clubs.

Uniting NEO's projects together will be a mission to tell powerful human stories that connect audiences with their passions. Projects that celebrate diversity and champion positive societal change will be central to the studio’s future plans.

Anouk Mertens, NEO Studios CEO, said: “Combining forces with the talented team in the US allows us to grow our capabilities and operate at a truly global scale. As part of the ELEVEN Group, NEO will be able to leverage our unique partnerships with talent, athletes, and leagues to tell powerful, untold stories that really connect audiences with their passions.”

Marc Watson, ELEVEN Group CEO, added: “The newly expanded NEO Studios will be an integral part of the ELEVEN Group, and give us the opportunity to supplement our compelling live sports offering with more award winning on demand content. NEO’s best in class production services will also empower us to deliver for rights partners and distributors around the world.”

Anouk Mertens will lead the business as Global CEO. NEO’s US team will be overseen by Emmy Award-winner Melanie Capacia Johnson (Managing Director NEO Studios US) and Jill Johnson (NEO Studios Head of Entertainment). NEO’s European operations will be headed up by Jimmy Rutherford (Director of Content) and Jonathan Gale (Director of Business Development).

NEO´s merger with Whistle Studios follows ELEVEN´s acquisition ofTeam Whistle in 2021 and marks a key milestone in the ELEVEN Group's journey to establishing itself as a global sports and entertainment powerhouse. The combined ELEVEN Group houses a total of 1,655 distribution channels and 665million aggregated social media followers, generating more than 4 billion video views each month. It serves fans with approximately 65,000 hours of live sport each year together with a slate of original programming. The Group also delivers a 360 offering to brands and rights holders, with a suite of digital marketing & talent management services, in addition to NEO's studio capabilities.