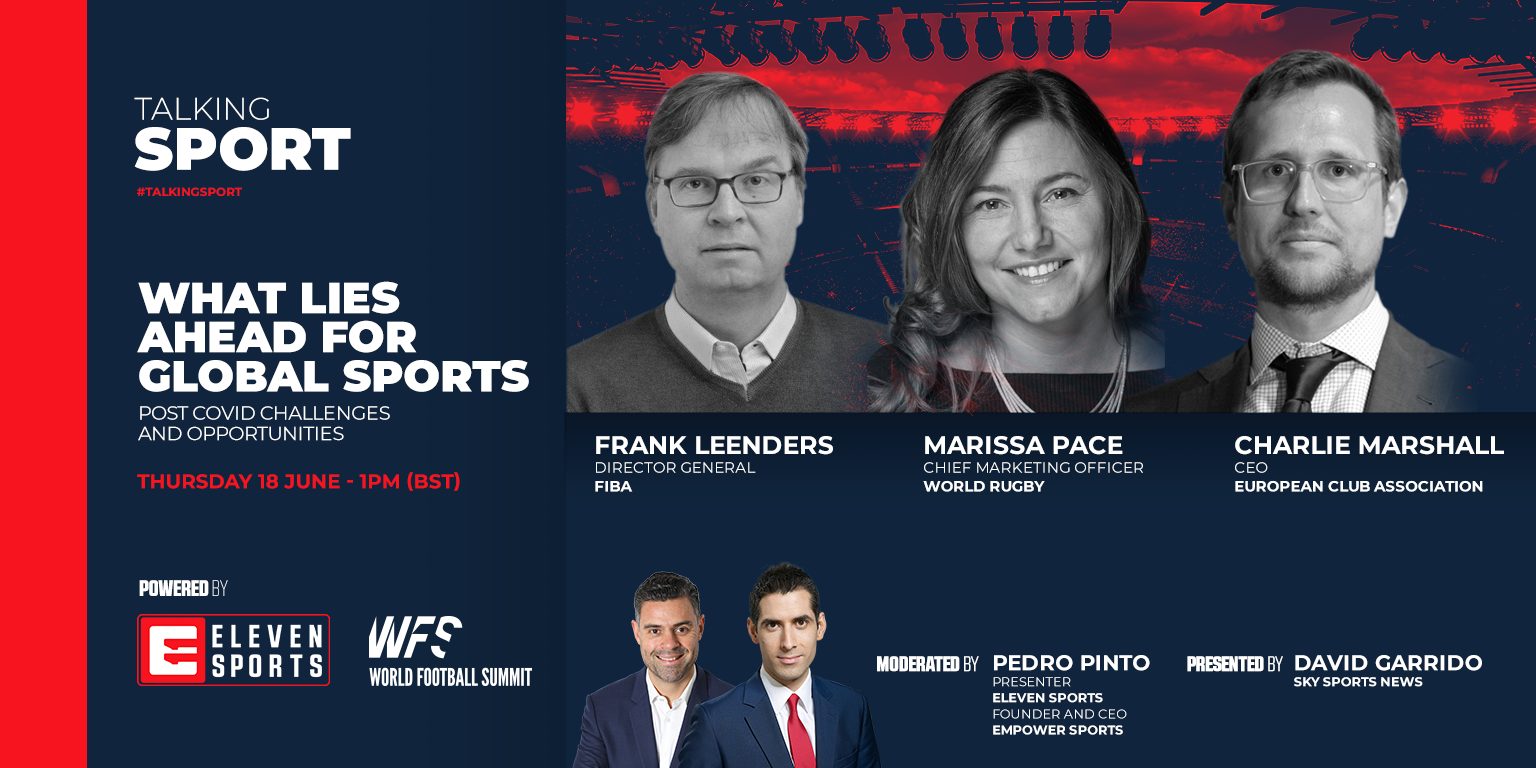 Covid-19 will change elements of the broadcast landscape forever and contract negotiations, viewer interaction and even match feeds could be permanently impacted.

This was the view of the trio of panellists in the latest episode of ‘Talking Sport’, a weekly webinar from World Football Summit and Eleven Sports. The three guests this week were Charlie Marshall, the European Club Association’s CEO, Marissa Pace, World Rugby’s Chief Marketing Officer, and Frank Leenders, FIBA’s Director General, and the title of the webinar was ‘What lies ahead for global sports? Post-COVID Challenges and Opportunities’.

Marshall, Pace and Leenders discussed the broadcasting world in depth, outlining how COVID-19 could end up marking a clear before and after. As Marshall wondered during the conversation: “What does it change going forward? Are we going to start to see commercial partners think much more about these kinds of eventualities and these kinds of force majeure events that might happen and how they affect, one way or the other, the value? I think that’s a very interesting point.”

The panel’s moderator Pedro Pinto, who is a leading presenter for Eleven Sports, also shared his views on how broadcasting could be permanently altered, suggesting that we could see greater use of spider cams and other angles that hide the lack of fans during the period of action behind closed doors, as well as new ways of allowing viewers to interact in real time. These innovations could then stick around.

On the other hand, the view from some panellists was that lockdown trends such as the rush to view historical matches from the archive and the proliferation of eSports tournaments might not continue on. “Even with all the creativity and all the great work that’s being done, it’s still nothing more than a temporary stop as nothing beats the live passion,” Leenders said of the rebroadcasting of classic games. “I’m not sure whether it started to achieve that goal of breaking into new ground, of actually acquiring audience from the more traditional aspects of sport,” Marshall said of eSports’ efforts during the past few weeks.

The next episode of ‘Talking Sport’ will take place next Thursday, June 25th, and the topic then will be ‘New brand partnerships for a new age’. Another group of experts will provide their insight on that topic and it’s already possible to register right here.

A selection of talking points from this week’s episode of ‘Talking Sport’:

Frank Leenders, on certain countries’ premature cancellation of their seasons:

“I have seen what happened in the Netherlands. I think that in hindsight, and that’s a big remark to make, I definitely think the Netherlands and France have taken longer term decisions far too early. For instance, in the Netherlands it’s not even a national decision. There, you have city mayors saying ‘yes’ or ‘no’. At that point in time, the general feeling was that when people were dying or in the hospital then you cannot prioritise a game of football. With football in particular, there’s this feeling that ‘these are all millionaires and rich guys and whatever’ and it’s a very difficult PR battle to have. But, for me, it’s absolutely crystal clear that now, where they sit, to have decided in April that you can only play behind closed doors from September 1st was, for me, a big mistake.”

Charlie Marshall, on the value to broadcasters of fans:

“It’s clearly a very different product from a consumer point of view, a sports arena with no fans. Admirable as the innovations have been, in a very short space of time, with virtual fans and simulated crowd noise and the stadium dressing that minimises those empty seats being on camera, they clearly don’t bring the product back to what it was and to what it is when you have fans thronging the stadiums. The impact on valuation, therefore, is not an immediate one. We don’t want to get into contract speak here, but delivering a live feed of a game is one of the things that underpins all broadcasting contracts and no one really had to think before about whether the presence of fans within that feed was an important part of value. That’s the short-term thing. What does it change going forward? Are we going to start to see commercial partners think much more about these kinds of eventualities and these kinds of force majeure events that might happen and how they affect, one way or the other, the value? I think that’s a very interesting point.”

Marissa Pace, on the balance between creating new content and coping with reduced budgets:

“There’s two sides to this story for us. On the one side, we had to think of new ways of producing content, with new formats, and how to make our own moderators, own hosts, own commentary teams work from home, making things exciting. That was one part of the story. The other side is the natural budget cuts that come with stadiums being empty and no live sport. So, you’re having to be super creative and work with your agencies and your own team, yet, on the other hand, you’re having to look at budgets very carefully and scrutinise and make sure that you’re spending every dollar very carefully.”

Pedro Pinto, Presenter at Eleven Sports, on broadcasting innovations during this period:

“I think the broadcast angle of it is crucial. I personally don’t understand, as a fan, why the spider cam in football is not used more often, since it gets so close to the action and much closer than the traditional cameras in the stands get. As far as the closeness of the action and the social interaction, maybe there’s something like a Twitch-based feed that people can have access to in order to interact with the product and the traditional broadcast.”