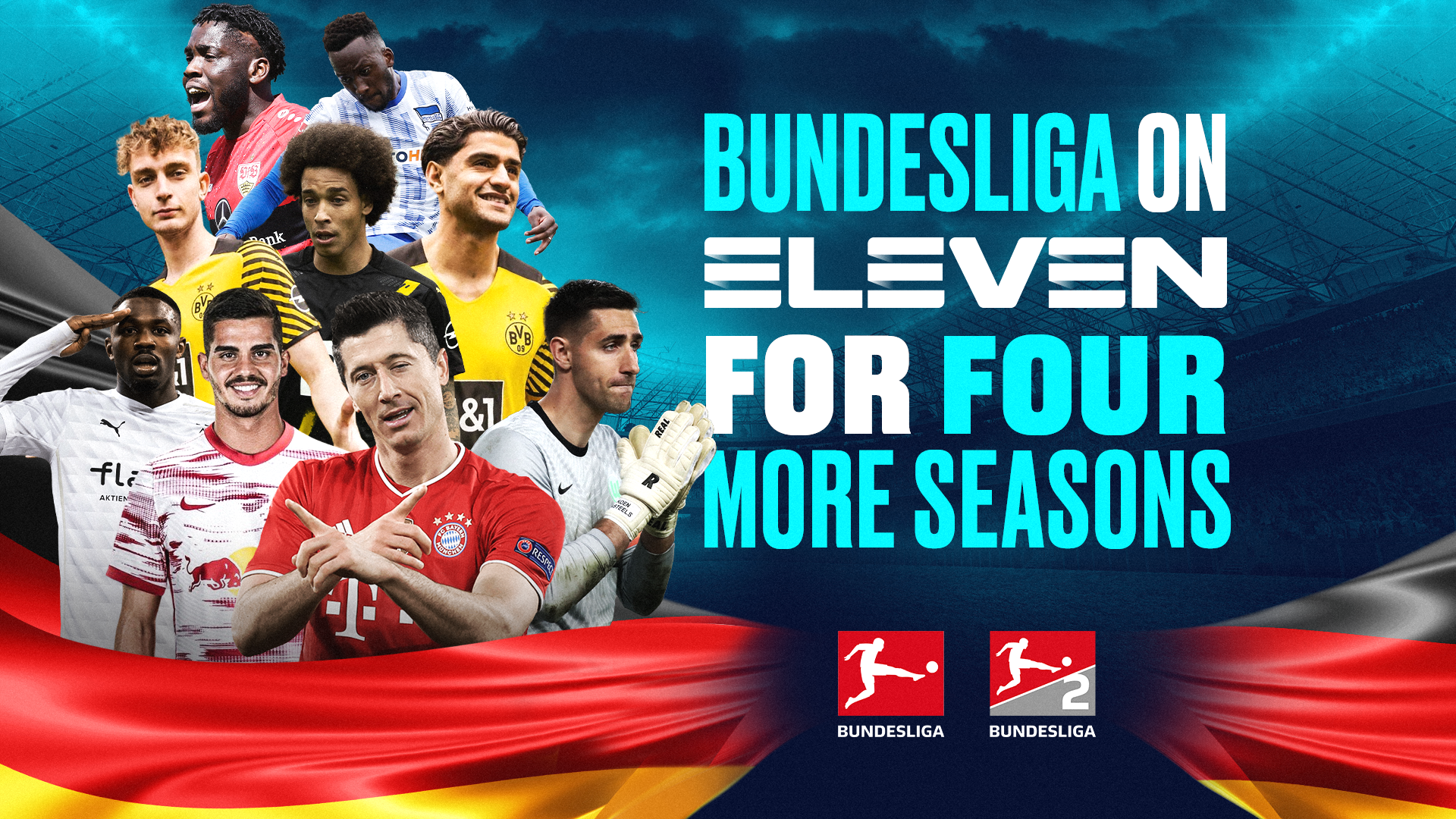 ELEVEN has secured a new four-year deal for LIVE rights to the Bundesliga and Bundesliga 2 in Portugal, Belgium and Luxembourg from the 2021-22 season.

ELEVEN will also hold broadcasting rights for the German Supercup and relegation play-offs each season.

With three of Europe’s top six scorers coming from the Bundesliga, including Portugal’s André Silva who finished the season with 28 goals, the Bundesliga is renowned for its fast, exciting football and remains a cornerstone of ELEVEN’s offering. In Belgium, ELEVEN will have the exclusive rights to show all Bundesliga matches in both French and Dutch across its linear and digital platforms. The offering is also available in Luxembourg, for which ELEVEN has acquired non-exclusive rights. In Portugal, ELEVEN maintains its position as the exclusive home of Bundesliga and will continue to entertain local fans with comprehensive coverage of the German top-flight.

As well as live match action, ELEVEN will keep fans up to date with all the latest developments from the Bundesliga, incorporating the Bundesliga Highlights Show and Bundesliga Weekly into its programming schedule and featuring the Bundesliga extensively across its digital and social media platforms.

Guillaume Collard, ELEVEN Belgium & Luxembourg Managing Director and Group Chief Rights Acquisition Officer, said: “At ELEVEN we want to serve fans with the greatest live sport in the world. Securing the rights to the Bundesliga for another four years is an important step in us delivering on that mission. From Der Klassiker to following all the action of Belgian players like Thorgan Hazard and Koen Casteels – the Bundesliga has lots to offer fans in Belgium and Luxembourg. Our new deal is testament to the partnership we have built with the Bundesliga over the past few years and we’re looking forward to continuing to work together in the seasons ahead.”

Jorge Pavão de Sousa, ELEVEN Portugal Managing Director, added: “This renewal is part of ELEVEN’s strategy to consolidate and grow our portfolio of leading sports rights in Portugal. The Bundesliga has enjoyed a double-digit growth in popularity in Portugal over the last rights cycle, as ELEVEN has championed the league and the great performances of players like André Silva, Raphaël Guerreiro and Gonçalo Paciência. We would like to thank the Bundesliga for the trust they’ve placed in us and look forward to continuing to bring our audience the best of German football in the seasons ahead.”

Robert Klein, CEO, Bundesliga International, said: “ELEVEN is a trusted partner with the shared ambition to constantly innovate the broadcasting experience for our fans. Extending our agreement in these markets is a great signal of intent to continue building the local Bundesliga following, and with players such as André Silva, Raphaël Guerreiro, Thorgan Hazard and Koen Casteels, we have the star power that local fans tune in for every matchday.”